Due to their inherent role in the inflammatory response, one type of biomarker that provides key biomarker insights when it comes to cancer immunotherapy is autoantibodies (antibodies). Autoantibodies are antibodies produced by B-cells that are geared against the body’s own proteins and tissues. Initially, these antibodies were thought to be the immune equivalent of ‘friendly fire’ – the immune system attacking the body – but the production of autoantibodies is increasingly being recognized as a more complex system, enabling the buffering of other immune responses, such as cytokine release, for example.

Autoantibodies can be found in two clinically and immunologically opposing diseases; autoimmune diseases and cancer. Often referred to as anti-tumor antibodies, or tumor associated antibodies, they are implicated heavily in cancer immunity as they are raised against cancerous cells for immune recognition and destruction via different mechanisms such as antibody-dependent cytoxicity (ADCC) mediated by natural killer cells or by complement-mediated destruction of tumor cells.

Autoantibodies are a proficient method to help understand the adaptive immune system’s response to disease, its treatment  and help to improve detection and characterization of immune-mediated diseases such as cancer.

Since B-cell responses—and their autoantibody products—may be directed against the same antigens as tumor-specific T-cells, autoantibodies represent a unique opportunity to serve as circulating biomarkers and indicators of the baseline immunocompetence of cancer patients. In patients treated with the checkpoint inhibitors pembrolizumab, nivolumab and ipilimumab, autoantibodies have been should to be predictive of both response and immune-related adverse events (Hassle et al., 2020). Another study, (P. Budde et al., 2018), where autoantibody profiling in prostvac and ipilimumab treated prostate cancer patients revealed potential biomarkers of immune-related adverse events (irAEs).

The development of therapeutic antibodies that modulate immune inhibitory pathways has been a major breakthrough in the treatment of cancer, but an underlying issue has been its association with immune-mediated adverse events (irAEs) which resemble autoimmune responses. As autoantibodies are established biomarkers for predicting the onset of a number of autoimmune and rheumatic diseases, in which the immune system attacks its own tissues, they appear to be the logical biomarker for identifying patients at risk to develop severe and life threating irAEs.

Autoantibodies are one of the causative agents of autoimmune diseases and are therefore critical biomarkers in this disease class.

Autoimmune diseases are highly diverse and the level of patient heterogeneity observed makes the development of effective treatments challenging. In addition, these diseases also have overlapping symptoms, making diagnosis difficult. For example, Oncimmune’s research into Systemic Lupus Erythematosus (SLE) has shown that the disease has 5 sub-disease groups based on autoantibody profiles. By stratifying patients based on the specific characteristics of their individual autoimmune profile, including the detection of biomarkers that are central to the disease’s pathology, autoantibody signatures can help address the following key questions:

Who can benefit from this immune biomarker class? 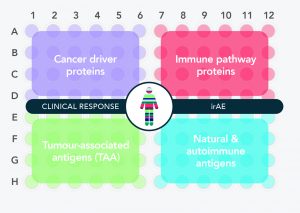 Pharmaceutical and biotech companies as well as research centers planning or undergoing clinical development can benefit from autoantibody profiling to enable the characterization of the immune response to disease, identification of patient subgroups that are more likely to be responsive to therapy and the prediction of patient risk.

With two decades of experience in autoimmune, oncology and infectious disease autoantibody biomarker profiling along the world’s largest human antigen library and powered by significant data analytics, ImmunoINSIGHTS™ is the platform of choice to advance your trials towards better treatment outcomes.

Our site uses cookies and other technologies to personalise your experience. Please read our Privacy Policy for more information on the processing of your personal data and how to delete or block the use of cookies. Find out more